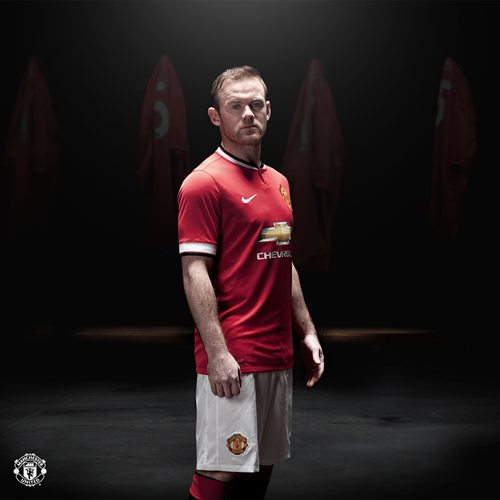 The new Manchester United home kit for the 2014/15 season proudly embodies the club’s purest and most authentic identity – the iconic red, white and black colours that are instantly recognised around the world.

The shirt welcomes the return of the white collar, which for the first time is a ribbed crew neck design. The collar also has a subtle chevron finish, replicating the pattern used on the chest of United shirts from the early 20th century and in more recent times.

A hidden button in the collar is unique to the shirt – red with a black trim and engraved with the club name – while there is a small label inside the back of the neck with the message “Youth, Courage, Greatness” to represent the club’s values.

On the back of the shirt, below the neck, is a black devil from the club crest. Across the back is an engineered mesh in a series of chevrons to again emphasise the importance of the shape to United.

The new Manchester United home kit is available to pre-order now on United Direct and Nike.com ahead of its worldwide release on Monday 16 July.

It will be worn for the first time on Wednesday 23 July when the Reds face LA Galaxy as part of the Tour 2014, presented by Aon.