Manchester United will play five matches in the United States as part of Tour 2017, presented by Aon. 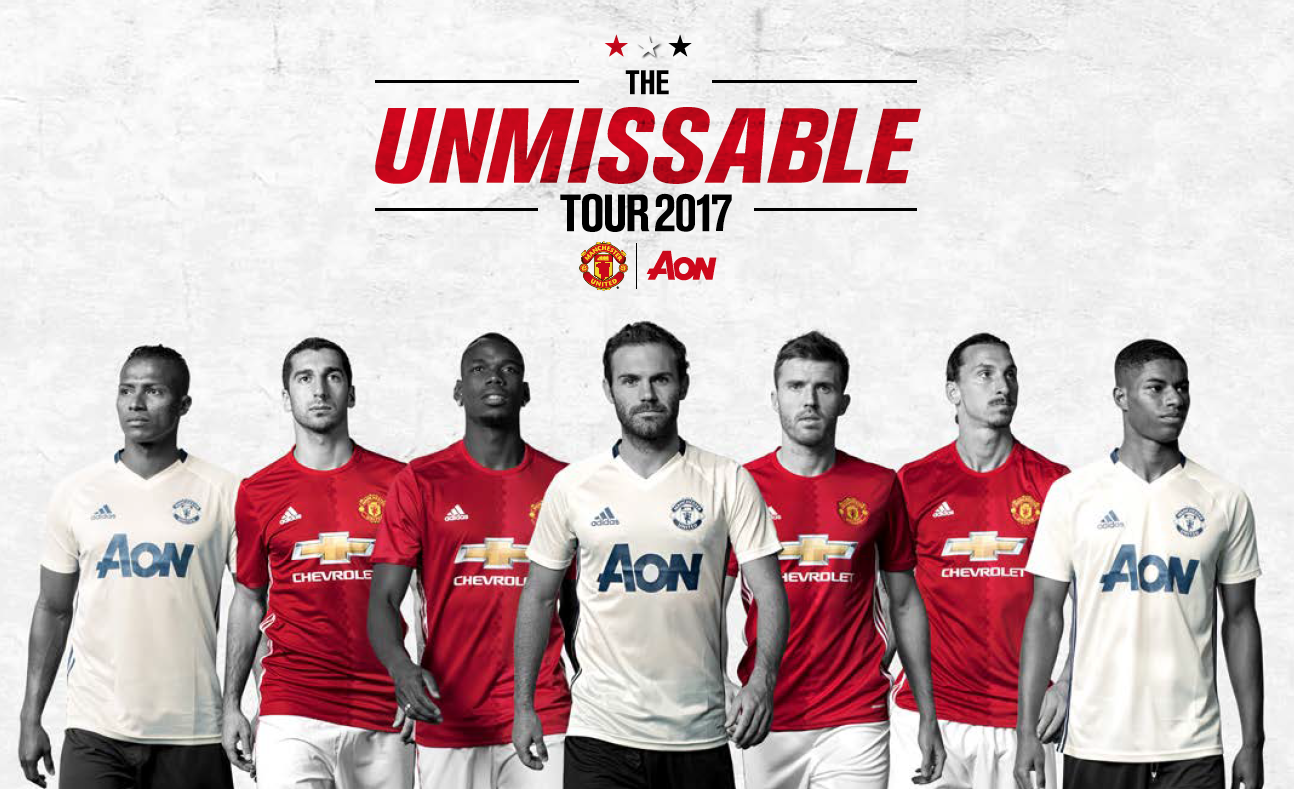 Jose Mourinho’s squad will again take part in the International Champions Cup (ICC) with matches against Manchester City, Real Madrid CF, FC Barcelona and two friendly matches against MLS sides LA Galaxy and Real Salt Lake as the United squad prepares for the start of the 2017/18 season. Supporters can now sign up to be first to receive news on when tickets will go on sale, visit www.manutd.com/tour2017

There are a myriad of ways to secure tickets to the “Unmissable” Tour, here are notable dates for release:

Membership opens for 2017/18: www.manutdusa.com/membership
Pre-pre sale individual and group inquiries for inclusion within special One United USA section are finalized. To register, email tour2017@manutdusa.com to secure your place.

One United USA will release EXCLUSIVE pre-presale access to our USA Supporters Club dedicated section (directly behind the net) for individuals and groups who want to be “United” in the Home section.

Information will be posted on our official website and across social channels.

Both Manchester United and ICC presale open for Real Madrid CF and FC Barcelona matches with access to LA Galaxy and Real Salt Lake to follow, post-presale, to their respective Season Ticket holders.
Information will also be posted on our official website and across social channels.

Do I have to buy Membership to get match tickets on Tour 2017?

However, membership provides privileges for the forthcoming season. Supporters who subscribe to BOTH official membership and supplement will have preferred access to participation in official USA Supporters activations during Tour 2017 and presale ticket allocations. Membership is included within our EXCLUSIVE allocation and secures match ticket, open training, USA Supporters on Tour scarf.

To register, email tour2017@manutdusa.com to secure your place within our dedicated section.

What’s included in Membership? Both Official and USA Supporters Supplement?

The supplemental Membership includes USA-specific collateral to enhance the global package with a myriad of options.

Supporters who subscribe to BOTH official membership and supplement will have preferred access to participation in official USA Supporters activations and ticket allocations.

(Membership does not automatically secure or guarantee acquisition of admission to matches, training sessions or events). All memberships expire at the end of May 2018.
For Membership features and benefits, visit www.manutdusa.com/membership

When will I receive my Membership package?

Membership packages will not ship until three to four weeks after August 1, 2017 and will coincide with dispatch from Old Trafford.

However, if you’ve secured tickets, training or tailgate admission during Tour 2017, Members will receive their commemorative USA Supporters on Tour scarf in July, in time for Tour 2017.

I’m already a member, why do I have to join again?

If you are a current member of either the official Membership or the USA Supplement, your membership concludes at the end of the current season in May 2017. Thus, we are providing early access for next season with special benefits surrounding the Club’s participation in the “United” States. If you have any questions about current Membership, please email membership@manutdusa.com for more information.

One United USA will provide a link and access code for Members who’ve previously purchased Membership packages and/or presale link provided by Manchester United and ICC for all available tickets at each respective venue.

Pricing is available for individual and multiple occupancy across all venues on Tour 2017 and will be announced for each venue on Monday, March 27.

If you are interested in joining us, please email tour2017@manutdusa.com for pricing and more information.

Where and when is Open Training?

Open training often takes place the day prior at the match venue. For a rare, intimate view of squad preparation, these exclusive sessions are only available via official Supporters Club, official partners and promoter promotion.
Subscription to BOTH official Membership and USA Supplement allows one Member and one (1) guest to one (1) venue for Open Training.

Note: Sessions are at the discretion of Club and promoter and may be closed without advance notice.

Where will the match against Manchester City be played?